Cohousing is “an intentional community of private homes clustered around shared space,” and I’m a fan.* I think design drives interaction, and many of our traditional neighborhoods minimize interaction, intentionally or not.

Consider the traditional nice neighborhood. The houses and yards are large, but neighbors don’t interact very much. When people arrive home from work, they pull into a garage and are seldom seen outside afterward. The neighbors aren’t antisocial, but the design of the neighborhood works against interaction.

Cohousing gets around this problem with an intentional design to promote interaction and sharing. The residents “have independent incomes and private lives, but neighbors collaboratively plan and manage community activities and shared spaces.” Sounds great, right? But it’s so difficult to do that over half of all attempts at cohousing developments, it is said, end up failing to ever break ground.

As an economist (my day job, forgive me), I wonder why. Why is a desirable model that many people want so hard to pull off?** And from lurking and my own experience, I have a partial answer: the transaction costs of starting and governing a cohousing community are high. Have a look at the well-established cohousing LISTSERV and you’ll see what I mean. Questions that are easily decided by a household (what kind of dishwasher to buy?) become matters for extended discussion and debate in a shared space (residential or commercial dishwasher for the big common kitchen?) To be sure, for dedicated cohousers the advantages overwhelm the decision-making costs.

So — if many people want more community in their lives and most won’t have a practical cohousing option, how do we get more community? I have a diagram (that economist in me, again) that illustrates an answer:

The vertical axis of this diagram shows the number of households in a decision-making unit. The horizontal axis shows the degree of shared decision-making (little or none at the left, extensive at the right). Notice that traditional single-family household occupies a point at the lower left. It’s just one housing unit and it makes all of its own decisions. 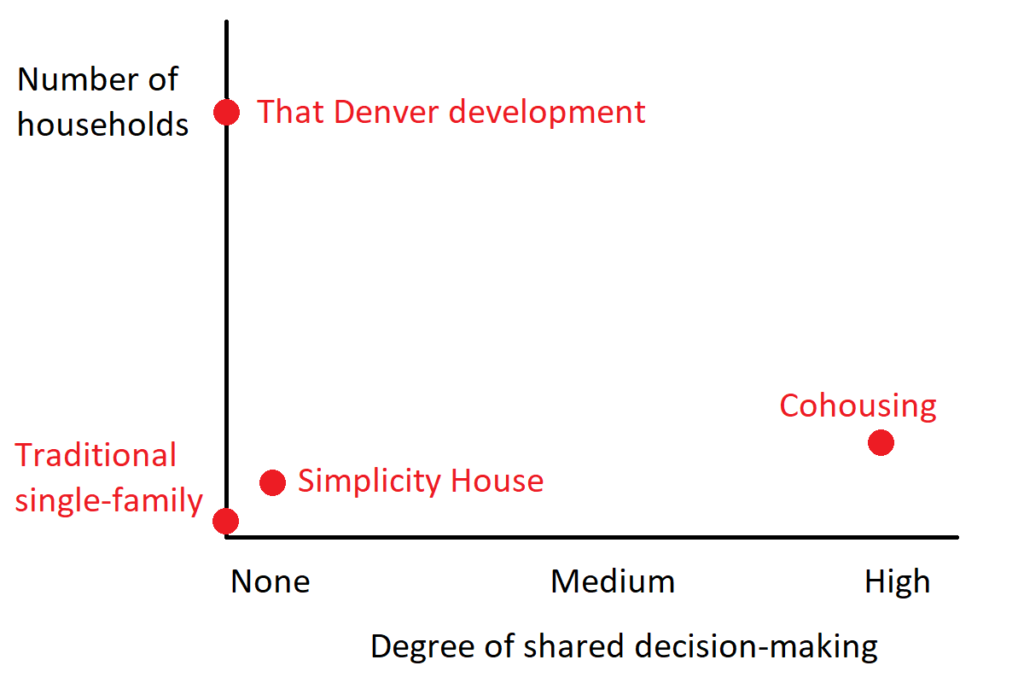 Cohousing as understood today involves 20 to 40 households and a high degree of shared decision-making (see where it is on the diagram).

Notice also that a small close-knit neighborhood might show up on this diagram as having 15 homes and no community decision-making — and yet be a highly cohesive place where interpersonal relationships drive community.

Finally, the answer to my question: How do we get more community through neighborhood design? A number of different models are being tried — “let ten thousand flowers bloom.” We can all learn from the successes and failures of developments that include, say, common facilities but no democratic self-management. We’ll get the answers from a lot of experimentation with a great many models and sharing of results. I hope cohousing communities grow and thrive and teach the rest of us a great deal.

*Footnote 1: If I’m a fan, why am I not actively involved in a local cohousing startup? Because my project, Simplicity House, is specifically geared toward care of a small number of intellectually disabled adults. That’s hard enough without trying to make it part of a successful cohousing startup too.

**Footnote 2: Do a great many people want to live in cohousing, and simply lack access to a feasible cohousing development where they want to live? I’m not sure. Cohousing is highly attractive to its prime demographic, but that demographic is narrow. I’d like to gently suggest that for many people, democratic self-management is a drawback, not an advantage. They do not like the idea of lots of meetings or joint decision-making on points that are individual choices elsewhere.