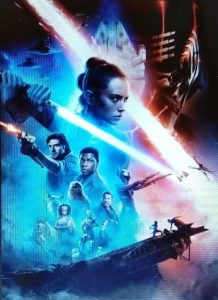 Now with Star Wars IX: The Rise of Skywalker, the nine Star Wars films are complete. I was in the theater for the first film with my girlfriend about 43 years ago. A lot has happened in my life (that girlfriend is now my wife of 42 years), and . . . I’m a fan. I truly enjoyed what Star Wars did for filmmaking. I’m not a big-time movie-goer, but Star Wars will always get me to the theater.

Still, after leaving the theater this time I felt mostly relief and exhaustion — relief that the producers ended it with one that didn’t stink up the theater, and exhaustion because they have more than fully exploited that Star Wars universe. Taking the whole series in perspective (and from re-watching the first six at home), here are my impressions:

Star Wars I: The Phantom Menace. On seeing it again, the best part was the opening fanfare and crawl. “The franchise will live!” I thought, after Star Wars was absent from theaters from 1983 until 1999’s Star Wars I premiere . . . and everything was downhill from there.

Star Wars II: Attack of the Clones. Now after seeing it again, my favorite scene is the closing: Anakin and Padme’s wedding, with C3PO and R2D2 as witnesses. Why my favorite? Because the music foreshadows the tragedy and, more importantly, the bride and groom speak no words. Thus they save us from more dialogue like the earlier: “Now that I’m with you again, I’m in agony.”

Star Wars III:  Revenge of the Sith. Now we’re getting somewhere. It’s not so good, but at least we find out why Darth Vader turned out to be the baddest guy in the galaxy. The best scenes are the ones that link him to Star Wars IV.

Star Wars IV: A New Hope. Woohoo! Somebody just opened the creative windows in a stuffy oppressive room (so to speak), and a fresh breeze is blowing in. What else from 1977 holds up so well as this movie?

Star Wars V: The Empire Strikes Back. Another great film, in which a running time of just over two hours gets us action, romance, Yoda and the big reveal: Darth Vader is Luke’s father! (I was one of the three people in a packed Birmingham, Alabama, theater who did not see that coming.) And the scene still shocks me on the Blu-Ray replay, even though I know every line.

Star Wars VI: Return of the Jedi. Nice film to wrap up the Darth Vader story line. The franchise is getting a little tired by now, but seeing the characters again makes it worthwhile. The scene where Luke tells Leia she’s his sister, the pyre on which Vader’s body burns, and the celebrations at the end wrap things up nicely. (Hey, I didn’t know somebody would save the melted face helmet from the pyre.)

I’m a fan through and through, so I can only quibble a little with the franchise on this point: The bad guys have a fatal over-reliance on A Big Destructive Space Technology That Has a Key Weakness to be Exploited by a Few Inside Attackers and a Few Bold Fighter Pilots.

Star Wars VII: The Force Awakens. And you know what? The bad guys change their name from the Empire to the First Order but they still didn’t learn their lesson about A Big Destructive Space Technology That Has a Key Weakness to be Exploited by a Few Inside Attackers and a Few Bold Fighter Pilots. This time the space station is actually an entire planet but it’s just as vulnerable. The inability of the villains to learn and adapt puts them way below the level of the Borg (different universe, I know).

Star Wars VIII: The Last Jedi. I’ll just say that after seeing VIII, I then liked VII as more than a competent sequel, because it nicely set up Finn and Rey for VIII. To me, “The Last Jedi” redeemed “The Force Awakens” in much the same way that “Revenge of the Sith” redeemed “Attack of the Clones.” But in this film, clearly the franchise is getting old. There was no time in this movie that in the theater I told myself “Wow, I didn’t expect that!” Contrast that with the original Star Wars IV (1977), which surprised and delighted at every turn.

Star Wars IX: The Rise of Skywalker. On this one I’ll leave the big reviews to others and just sink down in relief and exhaustion. Yes, I’m relieved that the franchise’s new owners didn’t totally stink up the theater with this one. But as I walked out of the theater, I realized that I have set the bar very low — “just get it over with.” I’m still a fan. I’ll go to anything Star Wars. But:

Finally, an economic meta-point. (Well, I’m an economist; what did you expect?) The original Star Wars of 1977 was produced by Hollywood’s rebels — a merry band defying convention. Star Wars IX was produced by the Galactic Empire, or its modern day equivalent: a crushing conglomerate with loads of intellectual property and no sense of humor. Economic freedom, “you’re my only hope” for resisting the Mouse’s dominance, and your shields are failing.