We need a new word: Excessmas 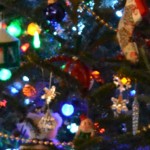 The English language needs a new word, for the celebration of excess that occurs every December. I have suggested “Excessmas,” and my suggestion was published in The Wall Street Journal. Excessmas has nothing to do with Nativity because Nativity is the celebration of Jesus Christ’s birth — a joyful and nonmaterialistic holiday. People of all faiths can find value in separating Nativity from Excessmas.

On the day after Thanksgiving the holiday shopping season will begin in earnest, we’re told. The media will report retail sales so we’ll know how the commercial holiday is going, people will try to use inoffensive and nonsectarian greetings such as “Happy Holidays,” and, predictably, there will be a protest when a Nativity scene goes up at a courthouse. Those who hold the meaning of the season dear will chafe at the commercial and religiously sanitized nature of the holiday.

One reaction is to try making the holiday more religious and more sectarian, as the shopping bag from the Christian bookstore says: “Jesus is the Reason for the Season.” In a religiously diverse society, however, this approach is bound to fail.

Therefore I seriously propose a different approach: Let us split what is now known as Christmas into two holidays.

The first holiday would be called “Nativity” and it would be exclusively religious. Christians would celebrate this holiday, with no expectation that governments or people of other faiths would recognize it.

The second holiday is harder to name, but for now let’s call it “Excessmas.” This holiday would be the season associated with excess in everything, including promotion, spending, consuming and drinking.

Splitting the holiday would have a number of advantages:

It would increase the precision of language in economic reporting. If retail sales lag projections, the media commonly report that it is a “dismal Christmas.” What’s dismal in that case is actually Excessmas. Christmas — as Nativity — could be more joyful than ever in such a season. The sales associated with Nativity are small; fourth-quarter sales associated with Excessmas are a very important economic phenomenon.

It would improve holiday observances. Christians would celebrate Nativity and Jews, of course, would continue to celebrate Hanukkah. Both groups could withdraw from celebrating Excessmas. Religious observances would be purely religious, with no thought of toning them down for the sake of pluralism. Meanwhile, Excessmas parties would no longer be encumbered with a fuzzy need to do something unselfish or think warm feelings. They could be wholly devoted to excess.

It would reduce holiday stress and depression. The holiday blues are a common occurrence, partly attributed to the futile quest for a “perfect Christmas.” The food must be perfect, the fire in the fireplace must burn brightly, and there really ought to be snow falling (even though the majority of our population lives where that’s statistically rare). That’s a perfect Excessmas, not a perfect Nativity. A perfect celebration of excess isn’t needed. All it has to be is excessive. Meanwhile, the celebrants of Nativity would find their perfection in what’s being celebrated and not in their own activities. Splitting the holiday could greatly reduce the disappointment of unfulfilled expectations.

It would end uncomfortable feelings that the season lasts too long. Nativity would be a short holiday appropriate to the religious observance. Excessmas, devoted as it is to excess in everything, could begin with September catalog mailings (as it does now) or even sooner.

If we split Nativity from Excessmas, we would only be recognizing what has long been fact for many observances. When the school chorus sings the praises of shoppers hearing silver bells or the jolly figure who’s coming to town with his full toy bag, the connection is to Excessmas, not Nativity. When the office party is made innocuous to religious sensibilities, the main principle it celebrates is indulgence. (Not that I would deny others their indulgences. I’m a teetotaler, not a prohibitionist.)

The December 25 origin of Christmas, we are told, was that early Christians wanted to celebrate at a time when the surrounding pagan revelries would cover their celebration. They rightly feared persecution and did not want to be conspicuous. Times have changed, but splitting the holiday would bring Christians back to their roots. It would allow for more precise reporting and an honest recognition of what’s being celebrated during Nativity and Excessmas.

Mr. Wood is professor of economics at James Madison University and a member of Beaver Creek Church of the Brethren in Spring Creek, Virginia.

How these ads use your data