My friends Steele and Alice have decided to fight human trafficking, dedicating their lives for some months or years to the cause. You can find out more about human trafficking at http://www.humantrafficking.org/ — it’s heartbreaking to learn of the millions of people forced into slavery. Yes, “slavery”; no other word is really accurate for what goes on. Steele and Alice will be posting to their site http://steeleandalice.tumblr.com as their plans mature. At that site you can donate to their mission.

. . . but should, and one day may? The Brethren Economics Study Center is my idea for bringing peace, simplicity and community to our economic system. Read about the idea at http://brethreneconomics.org.

Source Code and The Adjustment Bureau may not strike you as similar films, but consider this: They both address, in their own way, the fragility of timelines.

Here’s what I mean: Here in this space and time, there seems to be only one timeline. What you did yesterday is unchangeable. What you’ll do tomorrow is up to you. But how “fragile” is the timeline? That is, do small changes in day-to-day decisions have major effects on what happens next?

It’s easy to answer “no.” I get a cup of tea instead of a bottle of water at lunch — how will that affect anything important in my life?

But it’s also possible to answer “yes.” A young guy from Alabama has a choice of jobs and picks the one at the Newport News shipyard. He meets a nurse from Gladehill, Virginia who’s there on a temporary assignment. They marry, their paths change, and three new human beings exist who otherwise would not have. (This actually happened to my mom and dad. I’m one of the three.)

This second example makes timelines seem fragile to me. How would an Alabama guy have met that particular Virginia girl if he had taken a job closer to home? Would the timeline have sent him to Virginia somehow, so that they would have met anyway? We who are Christian believe that God is in control of the timeline, but how do free will and destiny interact on the timeline?

These ideas came to mind as I thought about The Adjustment Bureau. In this film, an ambitious politician (played by Matt Damon) needs to save the world, but apparently he won’t if he finds a particular woman (played by Emily Blunt). They were made for each other; together they will find happiness; but if they do he won’t save the world. Mysterious operatives called “the Adjustment Bureau” know the timelines and they try to keep the two apart.

Source Code is a very different film but timelines are important there too. Thanks to some fancy technology, our hero (played by Jake Gyllenhaal) relives the same eight minutes over and over — the last eight minutes before a train is bombed and many people are killed. From these repeated timelines, our hero can possibly relay information to military authorities who might save some lives. In Source Code, the timelines are fragile. In some of the timelines the train wouldn’t explode at all. And, how could I forget? Our hero becomes romantically involved with a woman (played by Michelle Monaghan) whose life will end in the explosion unless he intervenes.

Both films embody love stories. That’s no coincidence, because our relationships are by far the most interesting things that happen along our timelines.  Farther down the timeline, will you care more about your career, your car or your relationships? I think I know the answer.

Here are reviews of The Adjustment Bureau and Source Code that I found interesting. Meanwhile, I’ll see you on the timeline.

There’s a teacher at William C. Wood High School who punished a student for responding “God bless you” to a fellow student’s sneeze. Much as I’d like to have a high school named after me, that William C. Wood High School isn’t. And that high school is in Vacaville, California, thousands of miles from where I live. So, to those who find this site by looking for that school: I had nothing to do with it. In my part of the world, “Bless you” is a common reaction to a sneeze — not universal, but frequent. Nobody means any offense by it and typically none is taken.

OK, I’ll admit it: I’m a huge fan of Robert Jordan’s epic Wheel of Time series. It is a long, long story set in a different world. In fact, it’s so long that the original author was unable to finish it before his death in 2007, even though it stretched out to 11 novels.

So how could the series be finished? The original author left behind extensive notes and his widow chose Brandon Sanderson to complete the series. I have just finished the two joint novels, and they are excellent. Now only one novel remains to finish Jordan’s original tale.

It’s hard to summarize what this is all about, but I’ll try: A country boy named Rand turns out to be the Dragon Reborn — a prophesied leader who literally can save the world. Rand has two friends, Mat and Perrin, who also have key roles to play in this world’s future. Along the way, Jordan invented so many appealing characters and subplots, I just had to keep reading.

But I’m looking forward to the 14th and final volume, A Memory of Light. The authors have made me care about the characters and I’d like to see them all live happily ever after. Knowing fantasy literature, I doubt they will.

I’m serious about the connection between faith and economics. My paper on subprime lending and social justice was the lead article in the Journal of Markets and Morality. My book on the subject, Getting a Grip on Your Money, explored the subject and provided practical advice. I’m a member of the Association of Christian Economists, which provides a forum for many of us to discuss these issues. I’m also a member of the James Madison Christian Faculty Fellowship. But that’s mostly intellectual, and for me following Jesus Christ is much more than an intellectual pursuit. It has become my life goal and career goal.

To be specific about just one point, Jesus tells us how our efforts to meet the needs of the poor and visit those in prison will be judged: “Truly I tell you, whatever you did for one of the least of these brothers and sisters of mine, you did for me.” This means more than just dropping the occasional dollar into the Salvation Army bucket. For me as a Christian economist specifically, it means favoring the reforms that will truly empower the poor. And yet, the most important thing of all is not a matter of abstract reasoning or public policy. It is being faithful to God.

This is months behind the curve, I know, but we just saw Winter’s Bone at our house. I was truly impressed by this film. I saw everything the critics and fans did in this film, but maybe one more thing: This was a film that treated the rural poor with respect. The characters were real people, not Disney-fied or villified.

I thought I saw that in the film first time around, but listening to the director’s commentary convinced me. The people who did this film in rural Missouri went in to understand the people in Daniel Woodrell’s novel and bring them to life on the screen. The film’s heroine, Ree Dolly, redeems a lot of pain with her struggle to help her family make ends meet on their land.

At our house, we have a nodding acquaintance with rural poverty — not the kind as mean and threatening as depicted in the film, but a somewhat kinder and gentler southwestern Virginia variant of it. The authenticity of Winter’s Bone made it especially chilling, and uplifting, to us.

Here’s an idea with lots of jollies per dollar: Pandora Internet radio. The idea is pretty much like a radio station: music plays with only a few commercials. Where Pandora excels is in figuring out, automatically, what you’d like to hear. You start by giving it the name of a favorite artist or song, with some basic information about yourself. Pandora then picks music you would like. You can vote to “like” a song, in which case Pandora will play additional similar songs for you. Or you can vote to “unlike” a song and Pandora will move on to another one. As you vote on more songs, Pandora gets even better at figuring out what you like. Try it out at www.pandora.com . Oh, did I mention it’s free?

My latest project is a book, Economic Episodes in American History, forthcoming from Wohl. This book shows how economics shaped key parts of economic history. You can read about it here. Mark Schug and I worked hard putting it together, and we think it will be great for history teachers. Personally, I enjoyed finding out lots of neat things I didn’t know about American history. I hope history teachers will enjoy it, and use it to show students the economic side of history. We’re beginning to get a little buzz about it: see here and here. 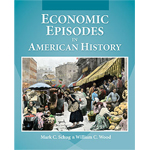 Here’s a fun game to play with people who care about grammar (word use, sentence structure and all that):

1. You hear incorrect grammar spoken, either by another person in the room or by someone in the media.

2. You repeat the thought, but with the grammar corrected. (This must be an actual grammatical error, and not just a matter of taste.)

3. If no one else in the room catches you doing that, you get one point. If others catch you, they call “correction!” and you lose one point.

Hint: When you’re playing against an experienced player, wait a few minutes before making a correction, preferably when someone’s phone is ringing, a dog is barking, and Girl Scouts have arrived at the door to sell cookies.

One other thing: At our house, correcting sportscasters will get you zero points. It’s just too easy.